Standing on a river bed made up of smooth rounded stones, cool water ran across my feet. I bent to wash my hands and picked up two of these river stones, tumbled into the same shape by erosion.
I was told to hold them outwards with my arms fully stretched each side.
Then He named them, the left ‘rightness’ and the right ‘justice’. As their equal weight rested in my hands I could have been a pair of scales. 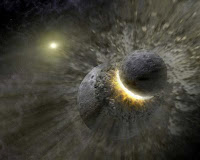 ‘Lift them upwards and smash them together over your head’
I did as He said and cracked the stones together above me… over and over again as if the sound was announcing the joining forces of these two entities. Water and chipped rock fell on my face as I continued to smash ‘Rightness’ and ‘Justice’ together, counting each crack and wondering when to stop. At forty-five I had reached the end and as I hit Left and Right together for the last time, I held them there with stone fragments and water all over my face and hair.

As I stood with the stones above my head, they began to change form and melt into one substance. I lowered my arms and watched as a sword evolved from the material cupped in my hands. The molten rock grew tall and burst into flame. It was entirely on fire and I was captivated as I began to swing the flaming blade round and around cutting the air with circles.
Around me the scenery changed, I no longer stood in the river but on a grassy hill. The One directing me had run ahead and with a similar sword, I stared dazed as He paused to stab it into the ground and then ran on. He kept yelling for me to follow suit as I watched His half-crazed antics. Finally, I actually moved and got into it, we zigzagged all over the hill thrusting our swords into the ground like mad people, laughing and whooping wildly.
‘We’ll smoke them out’ He shouted, ‘My people have gone underground, but we’ll smoke them out above ground’.
This manic activity was uproarious as if we had taken leave of our senses but slowly it gave way to something far deeper. Time and motion seemed to decelerate on what was now an expanse of green landscape. As the stabbing of the flaming sword was making an incision into the ground, I began to deliberately carve the blade in a line back and forth until it was slicing the land right open. Creating a deep cut it became a precise incision, like that of a surgeon’s knife along an invisible dotted line when beginning an operation.
Once opened I lifted the epidermis of the ground’s surface up on one side to peer underneath. Staring into a black hole I waited because something was rising to the surface.

A breeze fanned my face like warm breath as I stared at this phenomenon, it was a moment full of peace. A dark liquid gently rose filling the incision, it was a pool of blood that was gathering thickly and would soon spill from the cut that had been created.
I began to hear the faint sound of singing and it was coming from beneath the ground. It was getting nearer and clearer, suddenly it swirled up from the opened wound and I could hear words of forgiveness and mercy ringing around me. The song wrapped around my ears as if the singers walked right by me, tall and majestic, full of heavenly beauty and grace. For a passing moment a Lion’s face peered into my own with piercing eyes and then, as if drawn to the singing, He weaved and melted into the sound; 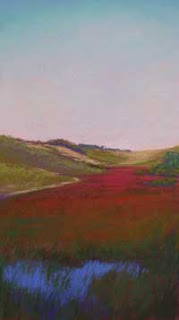 ‘We are not lost…..We are found
We are not forgotten…..We are remembered
We are not left …..We are forgiven
We are not buried ….We are redeemed’
It was the song of the Martyrs that circled in the air, unfurling in its new spacious surroundings. A song of forgiveness and abiding with ‘The Lamb’. A song of forgiveness and mercy released above ground and over the very land where their blood was shed, where they had fallen….falling straight into the arms of The Lamb Martyr who died for All. Their blood carries the highest song of the redeemed. It calls for ‘Rightness and Justice’ and is the antidote to the betrayal that slew them, when liberated from the place of burial and denial.