THE RULE OF CONTROL IS TO DIVIDE AND CONQUER
To hinder all that is divided in two from being ONE.
The ‘V’ for ‘verses’ and opposition
Holds two sides apart
Lest that which has been split up
REJOINS FORCES
Squeezing out the splinter,
The wedge of control….
In the knowledge that if they reform
CONTROL IS LOST
Control uses deception and lies to separate two halves of the whole,
It turns each against the other whilst ruling from the vantage point 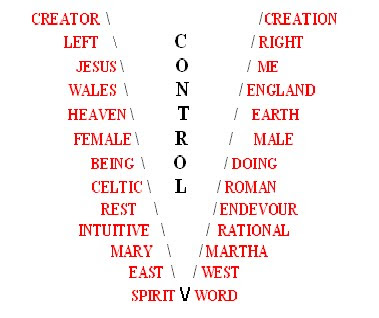 Favouring one above the other
It is like a CANCER riddling one half with it’s favour
And ostracising the other, causing deep wounds of offence.
Neither half is the true enemy however cancered or deformed
But rather THIS dividing wedge promoting enmity is….
These divides operate on many different levels
Presenting a way of life that is habitual
Designed to keep Creation from knowing its Maker
And the sons and daughters from coming into their own,
This is the root of injustice.
This is why we walk calling for 2 to become 1,
A walking heaven to earth connection
In intimacy with Jesus and inhabitants of His Glory.
A mystery, an unknown way flowing with The Holy Spirit.
This is a time of Jubilee where divides are healed.
That which has dominated and forced it’s Rightness
Will be redeemed, reborn and have a fresh start.
That which was crushed will be enabled to embrace
It’s counterpart and bring it up in a new way
As now ALL must come out of  THE REST.