All Walking » The Treasure Chest 2011 » Lincoln to Whitby
Add comments 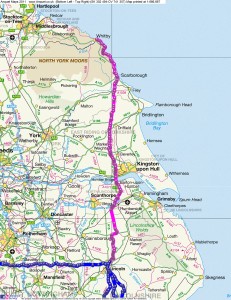 This has been a walk waiting to happen since April 2008. The starting point for all my walking in England was the connection between ‘Wilfred’, the first bishop of Selsey, and the Synod of Whitby in 664. Having walked a direct route, at different stages, between Selsey and Lincoln, heading north from Lincoln to Whitby completes this journey.

It was a ‘bell’ shape that we marked out on a desolate Selsey beach 3 years ago just by standing as a group in relation to where we lived. At that time we called to heaven to do what it liked with this enactment as we stood where the Bishopric originally operated and took communion. Since then that whole ‘bell’ shape geographically has been ‘walked out’ and so completing the walk up to Whitby is what it ‘hangs’ on, on the map it literally looks like the cord the ‘bell’ and ‘treasure chest’ hang on.

Up until this point there has been various assignments over the last 3 years that lead to an unplugging and draining away of ‘control’ at it’s entry points, a bit like taking the plug out of a bath full of stagnant water. Now it is time to focus on the original and authentic heartbeat of the land rather than the import that has sort to define who we are. So enough about Wilfred and his roman love and more about Hilda and her legacy of Christ’s love in ALL creation.

With this in mind we set our best foot forward as Catherine, of much coal mining blood-line walked up the aisle to wed the Prince of Wales suitably in residence in Anglesey!! I love it! I took the time to tarry a while in Lincoln and it’s cathedral to be freshly shod with the reality that if you marry royalty you become royalty and if you marry a King you become a Queen….legitimately fact!

This was an amazing day to walk. That morning the streets were dead, no-one was out and we made children start as we happened upon their favourite hang-outs when all adults seemed otherwise occupied watching the royal wedding.

We made our way through north Lincolnshire and up towards The Humber, as the afternoon drew on it was noticeable how inhospitable that area was, the land was dry and hard and it showed in the places and on the faces where we walked.

The next day we crossed The Humber, bridges always have such an exhilaration about them, two of the team felt such a strength surge through them as they walked the bridge. The land the other side slowly softened into the beautiful countryside of Yorkshire, a pleasure to walk through. We passed Driffield and headed towards Scarborough to make our way up the coast from there.

Staying in a holiday home on Filey Beach overlooking the whole bay, we took time to imbibe and enjoy Christ in us and feel His heart. There was a dormancy on the land like a heavy slumber as if falling asleep was a protective instinct . So we recognised that the lethargy that so easily permeates our focus to deaden our senses is the spell to be broken, as Jesus comes with His Cross to Kiss and Awaken that which has been in superficial death. As for Scarborough, there was a yearning that ‘She was once a true love of mine’, a Jesus’ song to her. These walks are all about unlocking identity, in the land and in those walking, uncovering the indigenous DNA from that which is not native or a foreign importation that has had dominion. There is an unhealthy madness that besets all life when capped and so the lid must come off in order to be exposed to the light of The Son. I believe there will be such a shift in mental illness as the false layers are removed from the land . All must come into it’s right mind.

From Scarborough to Ravenscar to Robinhood Bay we took the coast and proceeded along the cliff top to arrive at Whitby. A stunning walk. We stood on the cliff edge away from the Abbey ruins, having been there twice before, placing Welsh coal in the soil and leaving 3 white roses (wild fire and selfless pure love) I was done with the building. It on the edge and looking out to sea where an indigenous way was ushered back in. Banishment and exile always allows for return, a return for all that naturally rises from this land, foreign to all Greek dualism and roman domination.

Two massive unseen closed doors were opened wide and taken off their hinges to create an archway and we welcomed home who we are in the light of Christ in ALL, through ALL and for ALL. We stood as Hilda stood, trusting The One who has completely provided through His death for ALL redemption. Five women orchestrating full reversal, indigenous dial turned to ‘ON’ and import dial turned to ‘OFF’, quite simple really. We merely addressed that which has been an ‘Imported way of being’ and confessed an utter non-recognition of that which is not indigenous to these Islands. We were very clear, this foreign way has never worked, is not who we are and so must leave, we are done with this imposter and all quibbling will cease, enough is enough and we are DONE.

My huge thanks to Dawne and Francis Ward who hosted us for 2 nights in Nettleham, Lincoln and their 3 lovely children. The team, Vallyvoo, Debs, Mags, Lizzie, Phil, Dave and Tanya, you are all wonderful and I am so thankful for the gift of who you are. There are those walk with us while at home, calling and seeing as we go and encouraging us, I thank you so much.

This last weekend we have held for the first time a gathering in Selsey for about 80 people, which I believe is directly connected to all that has been walked and a sign of the land giving birth to a whole new way, where remaining taken up with ‘The Way’ will be the only way forward.

My next walk will be from Chester to Caerleon, June 9th – 12th, to continue cutting open the lid of the ‘treasure chest’.