All Walking » The Treasure Chest 2011 » Lincoln to Chester
Add comments

I was a tad daunted having been off the road for 8 months, so it is good to be off the starting blocks. This is the first leg of three walks that mark out a rectangle adjoining the ‘bell’ shape between Lincoln and St Albans. I have called it a ‘treasure chest’ and I believe these walks will unseal it’s lid. This ‘lid’ IS coming off the whole area which will in turn affect many other places linked outside the area. All the team came from outside this area, Preston, Swindon, Glasgow, Brighton, Winchester, Selsey and The Wirral. These are probably all places that are directly connected in some way and will receive a crucial knock-on affect which in turn will roll out to other places connected to them. For example, as Chester comes into alignment with Jesus for the sake of the nation and not just itself, it will directly affect Winchester which will in turn affect the places Winchester is connected to. 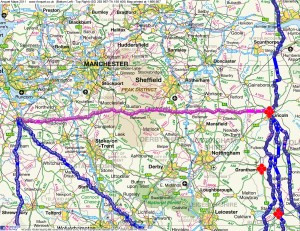 (Click on map to enlarge) Lincoln and Chester are the hinges by which this ‘lid’ opens to reveal the treasure beneath. The ‘lid’ I see is a layer of ‘control’ and the ‘chesters’ are the places that keep it in place. At this point I believe the four corners of this ‘Treasure Chest’ are such places.

My first ever walk in Turkey became an exercise to make an incision in the land and cut open the 300 miles between Adana and Ankara for the sake of what was beneath the surface. This walk feels very similar and having begun I am living with an incision that has been made, an opening that has begun and a surface that has been ‘sliced’ open so far.

Lincoln once again opened its doors to us specifically via my link with Linda Yoxon who is now resident in France. My deep thanks to Dawne and Francis Ward and their family for hosting us SO kindly, it is clear to see your hearth burns brightly for Jesus. My bond is deep with Lincoln, somehow we are fellow travellers and these further walks are only possible because this corner stone is in position for which I am so grateful.

As we walked towards Chesterfield it was remarkably warm, the twisted spire was easily visible like the hugest of signs in the centre of this ‘field’ flanked by Sheffield, Dronfield, Mansfield, Macclesfield, Holmsfield etc. So we called for this ‘harvest field’ and for no more twisting of the gospel. As part of our journey we looped our way around the church building in the opposite direction to it’s twisted spire and as if holding a rope, pulled for an untwisting. Making our way through the 12th Century marketplace, we kept hold of the loop we had made in order to pull, all the way to Chester, for a pure form of the gospel in the harvest field. From there the land rose towards the Peak District and we entered England’s postcard; A deep green carpet of soft rolling hills as far as the eye can see. With Chatsworth house to our left we made our way to Buxton through the birthplace of Andrew our walker from Paisley, Glasgow. Even the area of the Peak District resembles an ’embryo’ shape on the map, a birth place. It was here I was conscious that we crossed east to west, a former walk north to south from Leeds to Birmingham in 2007. As we walked through Baslow just north of Bakewell we were marking out a ‘cross’ in this birthing place by the crossing of these two walks. Passing through tiny villages with huge medieval Church buildings never ceases to amaze me, monuments standing for centuries and some with stonework that takes my breath away.

I am so grateful to Baz and Linda Gascoyne for giving us accommodation in Sheffield for two nights as we made our way west. Each morning as we took time to be with Jesus before setting off it was such fun laughing together and getting fully loaded by Jesus’ finished work that the actual logistics to get out onto the road were such a test! These walks are not easy but the ‘ease’ that is on us takes us through the hurdles which is a joy.

Through Macclesfield forest we made the descent out of the Peaks and the temperature had dropped. Having got past Chesterfield the mood seemed to change and the nearer we drew to Chester the frostier the reception felt. Moving forward like an arrowhead we continued more aware of the warmth of Jesus in eachother and filling every little place. No place is more important that another, turn over a rock on a lonely outcrop and Jesus is there just as much as the urban thoroughfares that demand such attention. Through the salt mines we went, the ‘wiches’, crossing Middlewich and on to the outskirts of Chester. This was a long day and to arrive at Jane Schroeder’s in Christleton, SW Chester to a hot meal and a warm welcome was a Godsend, bless you Janey.

After crossing three ancient bridges that were part of the medieval London/Holyhead road, we took the canal route escorted by Phil and Mags Tyler into Chester to complete this first leg. We stood in the centre of the walled city beside a dismal piece of stone named the Chester Cross. I have 12 impressive Eleanor Crosses in my invisible carpet bag but had no urge to add this to the collection. I had to note St. Peters beside us as we simply confessed our journey as individuals and as a group, to see all ‘lids’ of control removed. ‘The Crossed Keys’ recall the keys to the kingdom of heaven promised to Saint Peter. They were an emblem held by the ‘head of the Church’ over the western roman empire. The fact that Rome professed to have these keys was the persuading argument that handed an indigenous way of faith to the way of Rome at Whitby in 664. A finishing touch was to encounter a superb sculpture of a baby elephant called Janya (life) in Northgate. Elephants have been a theme in my walking that represents the east coming west to bring a balance to our western mindset, so to happen upon Janya was wonderful.

A team of walkers will return to Chester in June to walk south to Caerleon and some of these threads may develop more.The highlight of this walk was the team. They were complete stars and it was a pleasure to watch the camaraderie and Jesus encounter flourish amongst people unknown to each other before this walk. My huge gratitude goes to you Ruth Smith, Andrew Billingham, Dave Porter, Nicki Beaumont and Debs Robinson, amongst the blisters, laughter and bus hitching it was complete riot.

April 29th to May 2nd, I will be walking to Whitby from Lincoln to complete the walk already done from Selsey to Lincoln via Maidenhead. Having been there on ‘pirates day’ and on a ‘day of toil’, this third visit with be for The ‘Rest’ and the finished work of the Cross. Friday 29th April will be the royal wedding and the connections with Anglesey, Katherine, royal marriage and a love-match rather than blood, wealth or power are important keys that have been part of this journey. My son Aidan will be 13 on this day and is so named for the sake of the ‘Fire of the North’.